We’ve seen the Blue Jays, Indians and Cubs celebrate so far this month. Tonight the Dodgers or Nationals will have an on-the-field pile up. Nothing like postseason baseball.

One of the many Phillies postseason highlights happened on this date in 1993, Game #6 of the National League Championship Series at Veterans Stadium:

The 1993 Phillies went from last place the year before to the World Series under Jim Fregosi. The team led the majors in nicknames, mostly unflattering, “throwbacks”, “misfits”, “rejects”, “outlaws”, “wild”, “crazy”. Still remember a story in the Atlanta Constitution when we got there for Game #3, “Get the women and children off the streets. The Phillies are coming to town.”

League Leader
Cesar Hernandez led the National League in infield hits, 34 and bunt base hits, 15 and finished in a three-way tie for the major league high in triples, 11. 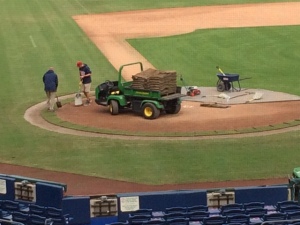 There was no game at the park yesterday. Plenty of clues . . . Ground crew was laying
grass turf in the home plate circle . . . Player’s parking area was empty . . . Both
clubhouses were locked . . . Concessions areas were being cleaned . . . 25,000 hot dog
rolls weren’t anywhere to be seen.

Elsewhere. GM Matt Klentak and his staff were finishing two days of meetings with the
pro scouts discussing potential free agents and players for possible trades . . . The
landscape crew was removing the summer flowers and prepping for winter plants .
. . The ballpark enterprise department was working on booking various parts of the
ballpark for meetings, parties, weddings, etc., during the offseason . . . An events,
ticketing and merchandise group was in the early stage of planning a promotions
schedule for next season . . . Plumbers, carpenters and electricians were working on
various repair projects.

Please Note
Now that we are in the off-season, Phillies Insider will switch to three times a week, unless there is a major news event. This blog will appear on Tuesday, Wednesday and Thursday.

News and notes will appear on Tuesday and Thursday. Wednesday will be “Wednesday Weekly Reader” day, feature stories about Phillies personnel who work behind the scenes.