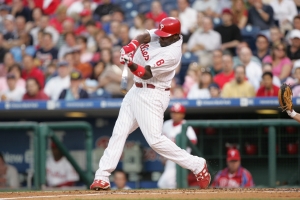 Not only is a season winding down, a career for a Phillies icon is nearing the finish line. Ryan Howard, the greatest first baseman in Phillies history, has six more potential starts, barring injury. Three right-handers are starting on the mound for the Braves in this series that begins tonight and Ryan is expected to be in the middle of the Phillies lineup as he’s done since he reached the majors 12 years ago.

After this series, the scene switches to Citizens Bank Park for three games against the Mets starting Friday night. Saturday’s game has been changed from 7:05 p.m. to 1:05 p.m. for a FOX telecast. It is only fitting that Mike Schmidt, the club’s all-time home run leader with 548, will be in the Phillies TV booth for the final game. He and Ryan are 1-2 in home runs for the Phillies and will be for a long time. They also have a special bond.

Howard’s currently sitting at 380 career homers which puts him in sole place for 70th on baseball’s all-time list. He’s hit one home run on this date, 2007, #126, John Smoltz vs. Atlanta.

Potpourri
The Phillies are the first team ever to have two first basemen with 20-plus home runs . . . Jimmy Rollins began as a TBS studio analyst on Sunday afternoon. He’ll also be there for the last Sunday and any TBS postseason games. Joining him are Gary Sheffield and Pedro Martinez. Jimmy has done similar TV in the past for FOX . . . Chase Utley has won the 2016 Roy Campanella Award as the Dodgers’ most inspirational player. Anyone surprised? Who makes the annual selection? The Dodger players . . . Vince Scully’s comment from his pre-game salute last week, “I’m going to retire, buy a small house with a large medicine cabinet.” . . . Baseball America has named Jorge Alfaro as the best defensive catcher in the minors.

Minor League Review
Each of the Phillies six domestic minor league affiliates finished above .500 for the first time since 1953 . . . Winning percentage for those six is .595, highest of all organizations . . . Four teams reached the playoffs . . . Phillies minor league players received one league MVP, one league Pitcher of the Year, one league Rookie of the Year, two Futures Game selections, four league Player of the Month Awards, 14 league Player of the Week honors.

Instructional League
For a story about the Phillies camp check out h://atmlb.com/2degAe6

September 27, 1977
RHP Larry Christenson wins his 18th game and drives in five runs as the Phillies capture their second NL East title, 15-9, over Chicago at Wrigley Field, their 101st win for the second straight year. 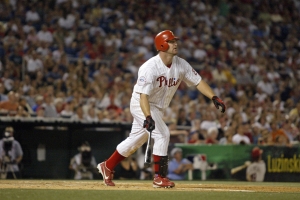 September 27, 2008
The Phillies beat Washington, 4-3, at Citizens Bank Park to wrap up Eastern Division title with one game left.

(Will blog daily through the rest of the season and Ryan Howard’s farewell).