Interleague play has some natural rivalries, Dodgers-Angels, Mets-Yankees, White Sox-Cubs, A’s-Giants, Reds-Indians, Nationals-Orioles.  Then there are rare oddities such as the Phillies and White Sox who play a mini two-game series in Chicago starting tonight. Since interleague play began in 1997 these two teams have met 12 times with Phillies winning seven.

What’s really rare….this is only the second time they have played in U.S. Cellular Field. Two games were played there in June of 2004. A third was postponed and played that August 30 before 5,747 fans. The White Sox won two of three slugfests. Final tally in runs: White Sox 33, Phillies 32. Jim Thome hit four homers and drove in 10 runs in three games for the Phillies. Phils’ designated hitters were Jason Michaels, Ricky Ledee and Thome.

Thome is now a special assistant to the Senior VP/General Manager.  Guess we know who he will be rooting for. 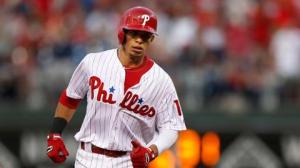 Postseason: 1st and 2nd half division winners, best-of-3. Winners advance to championship, best-of-5. To qualify, Clearwater needs to win the 2nd half.

Postseason: 1st and 2nd half division winners, best-of-3. Winners advance to championship, best-of-5. Lakewood needs to win the 2nd half to qualify for the postseason.

Postseason: Three Division winners and one wildcard team, best-of-3. Winners advance to championship, best-of-3. In the wildcard race, Cutters are in 3rd place, 2.5 games behind.

This Date
August 23, 1883
Phillies are charged with 27 errors in a game against Providence (walks, wild pitches and passed balls were charged as errors prior to 1888).