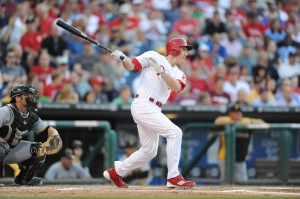 He was drafted by the Dodgers out of high school, didn’t sign, went to UCLA, drafted by the Phillies, signed and wound up at their greatest second baseman. Welcome home Chase Utley.

Starting tonight and for the next two nights, Utley will be back in Citizens Bank Park where performed for 13 years. Six of those were All-Star seasons.  He made his Phillies debut as a 24-year-old and will make his Dodgers debut in Philly at 37.  He’ll wear that familiar #26, only this time it is blue.  One would image there will be a lot of Utley jerseys in the stands, but Phillies red.

Chase is meeting with the media at 4:15 this afternoon in the Media Room, located on the service level between the two clubhouses. He’ll make that familiar walk after entering the park in right field.  This time he’ll walk by the Phillies clubhouse instead of making a right turn. Chances are Chase won’t get lost finding the LA clubhouse.

It was a similar route his longtime double play partner, Jimmy Rollins, made a year ago when he was wearing a Dodgers uniform and playing shortstop. His first game back was August 4. J-Roll struck out in his first at-bat against Jerome Williams.

Phil-Ins
Ryan Howard has 2,898 total bases, tying Chuck Klein for fifth place on the Phillies all-time list . . . Cesar Hernandez has reached base in 21 consecutive games . . . Phillies are 37-37 in night games and 17-13 vs. NL West . . . Eight different Phillies have played left field . . . Speaking of left field, Tom McCarthy, Ben Davis and Matt Stairs will be broadcasting tonight’s game for Comcast SportsNet from Harry The K’s restaurant.  While doing a game from the left field seats two years ago, McCarthy caught a home run.

This Date
August 16, 1977–Phillies extend their longest winning streak of the century to 13 games with a 7-5 decision in Montreal. The Phils hadn’t won that many in a row since 1892.