Not sure if Mets third baseman David Wright likes cheese steaks.  Do know he likes Citizens Bank Park.  When he stepped to the plate in the first inning his scoreboard stat for HR was a 0. So, he hit his first homer of the season in his first at-bat. His last at-bat? If you guessed another HR you win a cheese steak.

In 98 games at CBP, Wright has 22 homers, most among the enemy.  Those 22 are also the most for any visiting park for him.

Despite giving up only two runs in seven innings, Jerad Eickhoff took the loss in the 5-2 decision.  He’s allowed two earned runs or fewer in his last seven starts.  The bullpen gave up the other three runs on three solo homers.  The Mets are 19-6 in their last 25 games at CBP.

The Phillies offense has scored just 33 runs in 14 games and has yet to reach double figures in hits.

New Phillies
David Lough (pronounced LOW) was brought up yesterday and inserted in left field.  During his 312-game big league career (Royals and Orioles) he has played all three outfield positions. Last season he hit four runs for the Orioles, a game-winner vs. the Red Sox and a pinch-hit one vs. the Yankees. He was originally selected in the 11th round by KC in 2011 and signed as a minor league free agent by the Phillies in late January five days after his 30th birthday.  He was hitting .280 at Lehigh Valley.  In 25 at-bats, he had one walk and one strikeout.

To make room for Lough, Cedric Hunter was sent to Lehigh Valley.  Hunter arrived at the clubhouse at 10 a.m. on Monday, put on his uniform, went to the indoor batting cage to work on his hitting.  A few hours later, he was called into Pete Mackanin’s office and given the news.

On the minor league level, OF Alfredo Marte (mar-TAY) was acquired from the Orioles’ Triple A Norfolk Tides for a player to be named later or cash.  The 27-year has had brief appearances in the majors with the Orioles, Angels and Diamondbacks. He’s a right-handed hitter something the Phillies are lacking among outfielders in their top levels of the minors. 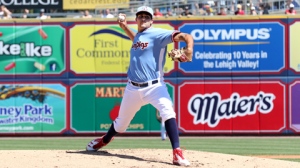 Lehigh Valley RHS Zach Elfin, 21, was named the International League Pitcher of The Week and the Phillies minor league pitcher of the week. In 2 starts, he was 2-0, 0.64 ERA, allowing 1 run on 7 hits in 14 innings. His 0.64 ERA ranks third in the IL.

C Jorge Alfaro of the Reading Fightin’ Phils was named the Eastern League Player of the Week and the Phillies minor league player of the week. Alfaro, 22, batted an even .500 (18-36) with four doubles, a triple, a home run and 10 RBI. He posted a .750 slugging percentage and 1.276 OPS, hitting safely in all eight games he played for Reading.

This Date
April 19, 1900–Phillies win in Boston, 19-17, in 10 innings, the highest scoring opener in NL history.  Boston scored nine in the bottom of the ninth to send the game into extra innings.

April 19, 1937–Phillies win a doubleheader beating Boston, 2-1, in 11 innings and 1-0 at Braves Field.  It is the only time the Phillies started the season with a twinbill.

Book Signings
I’ll be signing my new book, The Fightin’ Phillies, on the following dates: