Yep, that happened in spring training of 2004, Ryan’s first year in the major league camp.  That means he has the longest tenure in this year’s camp. The following spring he wore #12. When the 2005 season started, he switched to six.

He and all the rest of the infielders and the outfielders officially work out today for the first time.  Ryan will have a media session after the workout ends.

Last week we covered the competition that’s going on with the pitching staff.  Well, the other eight positions will have competition, too, but not as vibrant. 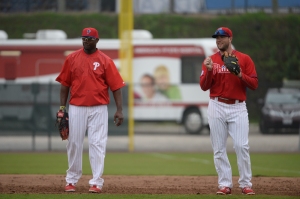 Who’s on first? A lot of eyes will be on Howard and Ruf.  Ryan has struggled against lefties in recent years while Ruf feasts on them.  Against right-handers, it is the opposite. Will it be a platoon? A lot of fans are down on Ryan which is a shame.  He’s had an outstanding career and will go down as the franchise’s greatest first baseman.  He just hasn’t been the same since Achilles and knee injuries.

Cesar Hernandez will be back at second, Freddy Galvis at shortstop and Maikel Franco at third.  Cody Asche and Andres Blanco will be the reserves.  As reported, Asche is going to work out at first base to increase his versatility.

All eyes will be on shortstop J.P. Crawford, the Phillies number #1 prospect.  Many predict his arrival in the big leagues will come later in the season. Management has indicated the young prospects will be brought up when they are ready to stay.

Outfield
Well, here’s where there will be competition as to who will open the season in centerfield.  Odubel Herrera is the incumbent, newcomer Peter Bourjos excels defensively at that position and Aaron Altherr is a gifted athlete who can play all three.

Tyler Goeddel, the Rule 5 draftee and free agent David Lough can also play anywhere.  Asche is more of a left fielder.  Two highly-prized rookies, Roman Quinn and Nick Williams, will be watched closely.  Both can play center but need more seasoning. Of the two, Williams is the most likely to end up in left or right at AAA.

Of the eight outfielders in camp, only Altherr and Goeddel bat from the right side.  There seems to be a shortage of right-handed hitting outfielders in the game, not just with the Phillies.

Regardless of where Herrera, Bourjos and Altherr play, the Phillies will have an excellent defensive outfield this season which will certainly help the pitching staff.

Phun Fact
The Phillies very first spring training practice in Clearwater came on February 24, 1947, at Athletic Field. Only the Detroit Tigers have a longer tenure, having been in Lakeland, FL, consecutively since 1946.

Spring Training Memories
Andy Seminick, Phillies catcher in 1947, “It (clubhouse) was more like a wooden shack and looked like it might fall down any minute.  It was so cold the city finally agreed to install a pot-belly stove.  The shower area was small and the water was mostly cold.”

Curt Simmons’ first spring training was 1948.  “I remember the clubhouse was a dinky wooden structure.  Very close quarters, nails to hang your clothing.  I was a year out of high school and just thrilled to be there.”

As a rookie in 1950, pitcher Bob Miller went to spring training at Athletic Field.  “Small clubhouse. We were always bumping into each other.  It didn’t matter to me.  I was so proud to wear a Phillies uniform every time I stepped onto that field. The clubhouse guys washed the uniforms every day and hung them to dry on a couple of long lines outside the clubhouse. Can still see that.”

Alone but focused.  Pat Gillick, senior advisor to the president & general manager, intently watches a group of pitchers throwing from the mounds at Carpenter Field. This spring is his 59th in professional baseball. Phillies photographer Miles Kennedy.

Pingback: Full Camp – We Only Live Once