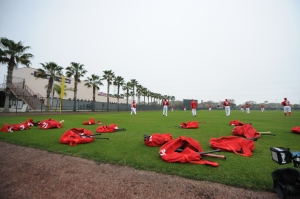 Miles Kennedy is the Phillies photographer.  He’s in Clearwater providing lens gems for phillies.com, the team’s publications and photo archives.  As part of the blog this spring, we’ll feature a lens gem from Miles.

Each day the players begin with calisthenics and then long toss. It’s been a spring training ritual that started again this morning at Carpenter Complex with pitchers and catchers.

Wheels’ Clearwater Report
This is my 45th straight year of being in spring training with the Phillies.  Every year brings change and excitement.

This year is really filled with change.  For the first time in my time with the Phillies the president’s office isn’t occupied by Ruly Carpenter, Bill Giles or David Montgomery. Last spring Pat Gillick sat at that desk as an interim president.  Andy MacPhail is there now.
Got know Andy a little bit after he assumed that role last season. I really enjoyed talking with him and hearing his perspective on baseball and our ball club.  He is very thoughtful and has a plan.  I believe the organization is in very good hands.

Pete Mackanin moved from the coaches’ room to the manager’s office at Bright House Field.  I’ve known him since 1978.  He ran the daily drills the last two springs for Ryne Sandberg but he’s in charge now.  Eager to see what changes he’s going to make.

The GM, Matt Klentak, is new.  Looking forward to getting to know him this spring.  Hard to believe I’m twice as old as he. Yikes.

There have been massive changes with the roster too.  There will be 36 pitchers in camp. Of that total, eight were in the big league camp with us at this time a year ago.  That’s the biggest change I’ve ever seen.  I’m looking forward to seeing the young arms. Chris Wheeler

Radio Change
Phillies radio broadcasts in the Philly are will now be aired on WIP 94.1 FM. Team had been on WCAU AM since 2005.

Same announcers, Scott Franzke, Larry Andersen and Jim Jackson, who will again handle the pre- and post-game shows in addition to some play-by-play during home games.  15 spring training games will be aired on 94.1.

All games of all teams can be heard on mlb.com through an audio package.

Phil-Ins
Baseball America, in its annual rating of minor league organizations, ranked the Phillies 8th, up from 22nd a year ago . . . Nine players in Phillies history have had one at-bat in one game.  Who was the latest?  Where is he now? Check out the story at http://www.phillies.com/alumni . . . Fan voting for the Wall of Fame begins next Tuesday on this website. 12 Alumni are on the ballot. Five years of service time has been changed to four years by the team’s Wall of Fame Committee that annually selects the players on the ballot . . . How big a turnover has there been in the Phillies pitching department?  Well, Luis Garcia has the longest tenure, three seasons.

Phun Fact
Carlos Ruiz’ first spring training camp was 2005. He wore #78. Chooch was never a non-roster player even though extra catchers are brought in from the minors.

Pingback: P-C Underway – We Only Live Once