There are a lot of components needed when building a championship club.  Pitching, defense, power are three obvious ones.  Not to be slighted are the positions up the middle: catcher-shortstop-second base-centerfield.

Now, it’s time to look ahead.  Dusting off the crystal, what’s the future core?

A year ago at this time, this position appeared to be thin in the Phillies organization.  But, Cameron Rupp, 27, stepped up and took over the starting job in the majors.  He can catch and throw and has power.  Coming off Tommy John surgery, 24-year-old Andrew Knapp took off last season to become a definite prospect.  A switch-hitter, Knapp needs to continue improving behind the plate.  The Cole Hamels trade brought 22-year-old Jorge Alfaro (pictured) to the Phillies organization.  A power bat and power arm, Alfaro is ranked 3rd among the MLBPipeline list of top 10 catchers; among top 100 prospects, 96th.  Down the road is Deivi Grullon, who turns 20 on February 17.  He played in low-A ball last summer and is a polished receiver. Not to be overlooked are Gabriel Lino, who was in AAA ball last year as a 22-year-old and left-handed hitting Logan Moore, 25, whose dad, Brad, once pitched for the Phillies. 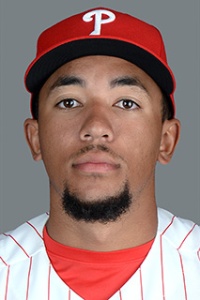 Freddy Galvis, 26, will be there again in 2016.  Coming soon will be 22-year-old J.P. Crawford (pictured) who split last season between Clearwater and Reading. On MLBPipeline’s top 100 players, he’s ranked fifth. Among their top 10 shortstops, second, the number he wore at Reading.  Generations of Phillies fans have seen long-term excellence from Larry Bowa and Jimmy Rollins.  Crawford should be the next generation shortstop. The system also  includes another defensive whiz, Malquin Canelo, 21, who played for Lakewood and Clearwater. Even younger is 18-year-old Arquimedes Gamboa out of Venezuela who made his pro debut with the Gulf Coast League Phillies.

Cesar Hernandez, 25, (pictured) will be back again this season. He’ll have to battle to keep this job as Freddy could move to second when Crawford arrives. Then there’s 21-year-old Scott Kingery who went from the University of Arizona to Lakewood last summer.  He’s projected as a fast track player to the majors.  Among MLBPipeline’s top 10 second basemen, Scott came in at #10. 23-year-old Josh Tobias, a 10th-round pick last summer out of the University of Florida, led Williamsport in hitting.  He’s a switch-hitter.

Line ‘em up. Incumbent is Odubel Herrera, the 24-year-old hitting machine who turned in an impressive rookie season in ’15. It was his first full season playing this position.
25-year-old Aaron Altherr can excel defensively at all three outfield positions but will probably settle in right field.  Nick Williams, 22, is another product of the Hamels trade.  He has all the tools and played center at Reading. Tyler Goeddel, the 23-year-old selected in the Rule 5 draft, has the tools to play anywhere in the outfield.  Then there’s 22-year-old Roman Quinn (pictured), a base-stealer and lead-off type hitter.  A converted shortstop, he has a strong arm.  Among the MLBPipeline’s top 100 prospects, Williams ranked 64th and Quinn 99th. In case you are wondering, Herrera and Williams bat left, Altherr and Goeddel, right and Quinn is a switch-hitter.  Centerfield should be fun to watch.

#1
ICYMI: The Phillies have seven players among the MLBPipeline’s top 100, most of any of the 30 big league teams.  In addition to Alfaro, Crawford, Williams and Quinn, OF Cornelius Randolph (84), RHS Mark Appel (70) and RHS Jake Thompson (55).

Four of the seven came via trades. Randolph was their first-round selection last summer.

Matt Klentak made another waiver claim last week, taking 29-year-old LHR Bobby LaFromboise (pronounced lah-frahm-BOYCE) from the Angels.  He’ll be in the mix for a bullpen job.

Pingback: Future Core – We Only Live Once