Introduced at a Monday morning media conference, Matt Klentak embarked on his first official business as the Phillies new general manager by flying to Clearwater that afternoon and the start of the organizational meetings that night. 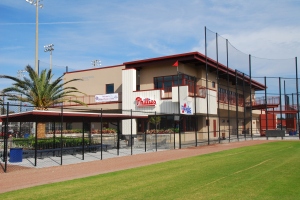 Baseball administration personnel, Pete Mackanin and his staff, player development staff, pro and amateur scouts, athletic trainers and conditioning coaches, vice presidents and those in Florida operations are meeting until Thursday. Most of the meetings will take place at the Carpenter Complex clubhouse. For Klentak, it will be a chance to meet his new teammates, so to speak, for the first time.

Then in two weeks, he’ll be heading for the annual general manager’s meetings in Boca Raton, FL.  Wonder what he’ll do in his spare time. 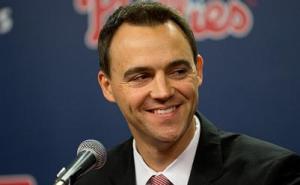 Klentak, wearing a red Phillies “P” on his left lapel, was very impressive during the long media conference at Citizens Bank Park. He was relaxed, poised, confident, articulate and animated.  His responses were thorough, his smile came easy and it was evident he has a pleasant personality.

Growing up in Medfield, MA, Matt Klentak was a Red Sox fan, obviously.  He experienced the passion of that fan base and an aggressive media base. As the Phillies general manager, he’ll experience the same in Philly.

He represents the new wave of GM, young Ivy-League grads (Matt became #10). As Andy MacPhail said, “In Matt we found an executive with the keen ability to understand cutting-edge baseball analytics, coupled with superior scouting, player development and leadership skills.”  Disappearing are the grizzled men who began in grass roots baseball and worked their way up the ladder to become a GM.

Klentak, since graduating from Dartmouth College in 2002, has gained valuable experience in video and advance scouting, coordination all of the amateur scouting reports, financial analyses and collective bargaining while working for the Rockies, Office of the Commissioner, Orioles and Angels, where he was the assistant GM the last four years. He, his wife and two daughters will re-locate back to the east coast.

GM List
Klentak becomes the Phillies’ 11th GM. Up until the Carpenter family bought the Phillies, the owner/president made most of the player personnel decisions. Herb Pennock, a Hall of Fame pitcher with the Yankees, was the Phillies first GM in 1943.

World Serious Time
This will be the first time a World Series doesn’t include at least one team that existed in 1903, the year the first official World Series was played.

So, who’ll win the World Series?  When leading after six innings, the Royals haven’t lost a postseason game in 2014 and 2015. So, Royals in seven.

Kansas City opens its 2016 season at home…..against the Mets.

I like what the new GM had to say. I like what I’ve heard from MacPhail so far. I’m impressed at the new direction that Middleton and the Bucks are taking. Hiring a President and GM from outside of the traditional Phillies network and emphasizing analytics is a seismic shift. It’s refreshing, long overdue, and I think will lead back to success in the next few years.