Change For The Future 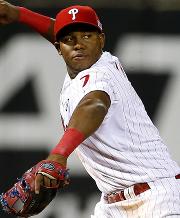 The Phillies future took a turn after last night’s game.  Asche was optioned to Lehigh Valley to play left field on a daily basis.  Maikel Franco is expected to join the Phillies this weekend and play third base. Asche’s departure cleared a roster spot for O’Sullivan, who will start tonight’s game against Pittsburgh.

By keeping Franco at LV for 40 days, it delays his free agency a year until from 2020 to 2021. Under baseball rules, an optioned player (Asche) must remain in the minor leagues for 10 days unless there is an injury on the big club.

1-Run Loss
Control usually isn’t an issue with Williams but last night two walks cost him as the Pirates hung on for a 4-3 win.  Marte followed the two, third-inning walks with his seventh homer in the last 24 games. A walk and an error accounted for the Pirates fourth run, an unearned run off Diekman.

The win went to Cole, who is now 9-1 in his last 12 starts.  He gave up single runs in the first and sixth.  The Phillies third run was a ninth-inning homer by Herrera, his first in the majors.  But, the Phillies fell short and are now 0-20 when trailing after eight innings.

Phun Fact
Pinch-hitter George Vukovich is the only Phillies player to hit a walk-off homer in the postseason, 10th inning, 1981 Division Series against Montreal at the Vet.

Just Wondering
The NFL (National Football League) appears to be turning into the National Felon League.