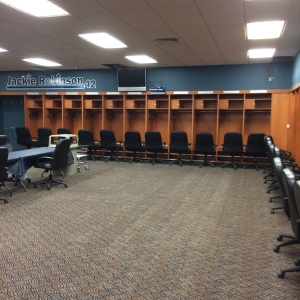 Lockers in the south end of the Phillies clubhouse at Bright House Field are empty right now.  This is the area in which rookies and most non-roster players will dress.

Sunday morning the equipment truck arrives at Bright House Field.  The process of unloading the truck begins early that day. The empty lockers will no longer be empty. President Pat Gillick checked in on Saturday and Dallas Green arrives in Clearwater tonight.

Pitchers and catchers will undergo physicals on Wednesday, February 17 and work out the next day at Carpenter Complex.  Full squad’s first workout is February 24.

Approximately a dozen players that will be in the big league camp are working out on their own. Cody Asche is one and he’s working in the outfield with instructors Rob Ducey and Andy Abad.  Idea is to see if he has the flexibility to play another position.

On The Air
It won’t be long until you hear the radio-TV voices of the Phillies once again.  The first spring training game is March 3, the Yankees at Bright House Field. It will be televised by Comcast Sportsnet and aired on CBS Radio in Philly.

CSN will televise six games with The Comcast Network carrying 12 more. MLB.com will carry seven and CBS radio will broadcast 14 games.  Two road games will be on ESPN TV.

Fan Favorite
Paul Hagen’s penned another “Where Are They Now” posted on http://www.phillies.com/alumni. Featured this time is Chris Coste, a fan favorite.  Be sure to check it out.