For just the secod time since Petro Park opened 10 years ago, the Phillies dropped a series (1-3) in San Diego’s home.

Last night’s loss was followed by a flight north to Oakland and a weekend series against the A’s, who are coming off a three-game sweep at home by the Rangers.  At the July 31 trade deadline, the A’s were in first two games up.  Since then, 17-28, and fighting for a wildcard berth.

The parade of lefty starters continues as the A’s will send out three in three games, making it five straight times the Phillies have faced a southpaw starter.

The weekend means the designated hitter for the Phillies and final interleague series.  The A’s have scored the third most runs in the AL and their 3.25 ERA is second lowest.

Final Road Series
Road games #79-80-81 will take place in Miami starting on Tuesday night.  Looks as if the Phillies will face a right-handed starter that night but another lefty the next night.

Historic Home Run
Thome is greeted by teammates following an historic home run. Find out the details at http://www.phillies.com/alumni. 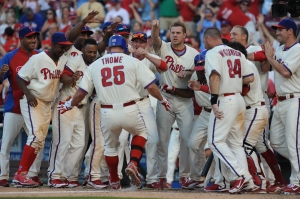 September 20, 1992
After snaring a low line drive hit by 3B Jeff King, 2B Mickey Morandini pulls off the first unassisted triple play in Phillies history during the sixth inning of a 3-2 loss in Pittsburgh.

September 21, 1911
RHP Grover Cleveland Alexander hurls his fourth straight shutout at Chicago.  Others were September 7 (at Braves), 13 (Dodgers) and 17 (at Reds).

September 21, 1964
Holding a 6 1/2-game lead with 12 games left in the season, the Phillies lose, 1-0, to Cincinnati as Chico Ruiz steals home with Frank Robinson at bat. The defeat launches a disastrous 10-game losing streak during which the Phillies fall out of first place.  Phillies drew 1,425,891, their largest attendance ever.

September 21, 2010
Phillies beat Atlanta, 5-3, as Roy Halladay becomes first Phillies right hander to win 20 games in a year since Robin Roberts in 1955. Halladay sets club record for most wins in a season at Citizens Bank Park with 12.

Book Signing
I’ll be signing my book (If These Walls Could Talk):