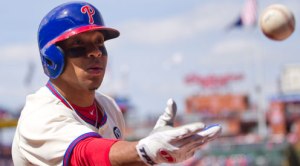 Tough 10-game road trip out west to Denver-LA-Phoenix, different time zones, 8 night games, 2 losses to start and then a rebound to finish 6-4. Now, time for some R&R with a day off today.

Much of the success on the trip came from R&R as in Revere and Ruiz.

Not to be overlooked yesterday was A.J., who was brilliant, 8 shutout innings. First win by a Phillies starter since April 4 (Cliff). Nieves caught A.J. for the second straight game. They now have a string of 15 consecutive scoreless innings going. By the way, the Phillies are 5-0 when Nieves catches.

Number of the Day
8: Phillies had gone 8 straight games scoring in the 7th inning or later until yesterday.

New York, New York
It will be Philadelphia against New York tomorrow night at the Sports Complex.

Phillies and Mets play and across the street, the Flyers face the Rangers.

Reading lost all 3 at New Hampshire . . . Ken Giles blew first save on Friday night in 11-10, 12-inning defeat. His 6 saves lead the Eastern League.

Catchers: LV’s Cameron Rupp has been on the DL since April 14 (oblique straight); he leads the club with 4 HR . . . Reading’s Tommy Joseph went on the DL on Saturday (concussion-like symptons); he missed most of last season with 2 concussion injuries; Tommy was hitting .316 in last 10 games and leading the club with 4 HR, 15 RBI . . . His DL triggered a flurry of roster moves involving catchers: Valle from Reading to LV when Rupp went down; Logan Moore from Clearwater to Reading; Chad Carman from Clearwater to Reading; Gabriel Lino from Lakewood to Clearwater . . . Phillies also signed a catcher, Lars Davis, who was released by Arizona’s AA club last week; he played in AAA a year ago . . . Davis was sent to Reading; Carman returned to Clearwater . . . Also on DL this weekend: Reading OF Kelly Dugan (oblique); Lakewood OF Larry Greene (left wrist sprain).

Hard To Believe
We’re still in April and All-Star voting is underway.

2 More Days
Yep, in 2 days it will be May 1. That means my book will be on sale in stores and online. Publisher: Triumph Books. Title: If These Walls Could Talk. Foreword: Larry Bowa. Paperback. 208 pages.