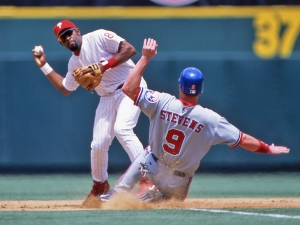 Former second baseman Marlon Anderson is now with MLB.com. What’s his role? Check out Paul Hagen’s “Where Are They Now” feature on Marlon at http://www.phillies.com/alumni.

A.J. still hasn’t won on that mound (0-4) but he was outstanding, giving up just 2 runs in 6.2 innings. When a starter can get to the seventh inning, it sets up the bullpen to do its thing and Jake, Mike, Antonio and Pap shut the door.

Ruiz, who earlier had his first triple since 2010, began the 10th with a pop fly to short left. Instead of just jogging assuming the ball would be caught, he busted it. The ball wasn’t caught and he was on second base from where he scored on Domonic’s single. The error was the 22nd for the Dodgers in 21 games.

Cole makes his first start tonight, meaning the Phillies have their rotation in order for the first time this season. He’s bidding to become the seventh pitcher in Phillies history to win 100 games.

Special Birthday
OF-1B-3B Chuck Harmon becomes the eighth Phillies Alumnus 90 years of age today. He closed out a four-year big league career with the Phillies in 1957, .256 in 57 games. Harmon also played for the Reds and Cardinals.

Harmon was sent a Phillies jersey with his name and number (50) on the back as a special birthday gift, a club tradition for Alumni who reach 90.

New Book
Coming May 1, If These Walls Could Talk, my new book. Larry Bowa wrote the foreword. Chapter 9: A Rough Rookie Season. Yep, my first year with the Phillies was 1964, a season to forget.