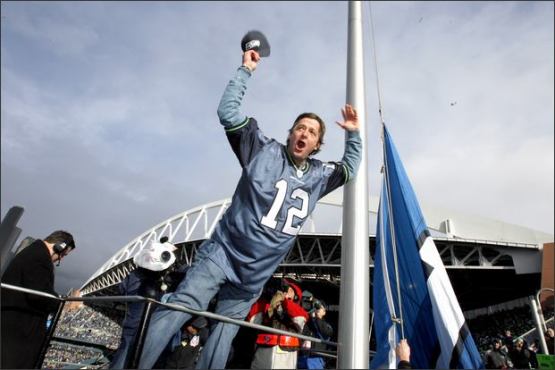 Don’t know how many Phillies fans watched the Redskins-Seahawks game last Saturday.  I didn’t but did see a video clip of Jamie Moyer riling up the fans before the game.

Moyer and his family live in Seattle, are huge Seahawks fans and season ticket holders.  Someone in the family is always at a home game.

One of the traditions in Seattle is the 12th Man.  On Saturday, Moyer was selected for that honor.

The Seahawks provided a suite for Moyer and his family; he did a radio talk show interview pre-game and then he and his family were taken to the field for a close-up view of the warm up session.

“It was awesome,” said the 45-year-old Moyer.  “I felt very honored to have been chosen, especially since it was a playoff game. The Seahawks treated us wonderfully.   It was just a great environment and completely positive.”

But, the part of the honor that was the attention-grabber: Moyer was the one to raise the 12th man flag…..from the south side roof of Qwest Field, yes a roof top level platform (and railing).

“The idea is to raise the flag and then get the fans pumped.  Once I got up there, the adrenaline kicked in.  I guess I got a little carried away when I stood on the railing.  It seemed as if I was up there for an eternity.  But, what a thrill.”

Being a pitcher, Moyer should get the win since the Seahawks won.   An encore has to be in the works.  “No, it is a once-in-a–lifetime deal.  Once and done.  I’ll always remember it,” said Moyer with a great deal of enthusiasm.  He sounded more like a 15-year-old.

Jamie brought the same enthusiasm that he brings to every game he starts. He is a class act, a great mentor, and the Phillies and their fans are lucky to have him in red pinstripes!